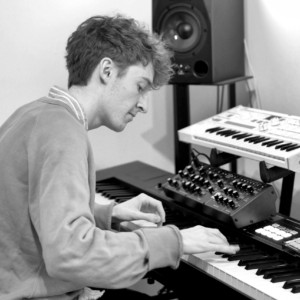 Robert Dimbleby is a 24 year old pianist and multi-instrumentalist based in Derbyshire/Kent, UK. Born and raised in a small village on the edge of the pastoral Peak District landscape, Robert naturally had to find a hobby to pass the time when he wasn’t climbing trees or hanging out with his local peers (both of them). Fortunately, his grandma was a piano teacher and saw an opportunity to inspire a young musician by way of an upright piano. Sure enough, as soon as Robert was tall enough to reach the keyboard there was no stopping him. At age 8 he became captivated by the driving boogie-woogie music of Albert Ammons and Meade Lux Lewis and he has been honing his craft as an improviser ever since. Although classically trained up to DipABRSM level, Robert’s primary focus has always remained in the worlds of jazz, funk and soul, drawing inspiration over the years from Oscar Peterson, Herbie Hancock, Kenny Barron, Joe Sample, Stevie Wonder, Jason Rebello, and many more. As a result his music is a joyful concoction of funky grooves, catchy melodies, and improvisational chops.

Robert is also an active session musician, performing regularly at gigs across the country with bands including: